Click the video link below to see previous Sunday Sermons 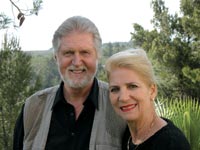 Originally from Canada, Jay and Meridel live and work in the heart of Jerusalem.They have a heart for the Jewish people and to see the media from within Israel is brought to the rest of the world.

Jerusalem Vistas was founded in 1984 by Dr. Jay and Meridel Rawlings. The purpose of this organization is to provide media tools and input for a worldwide audience in both print and multimedia format. Jerusalem Vistas  is registered in Canada and the USA as non-profit charities with tax-exempt status. In Germany and Israel we are registered as a non-profit media corporation called Israel Vision, which now broadcasts worldwide covering 80% of the globe with 200 million potential viewers.

Our Goal:  Our goal is to open a window for you on topics not usually seen in the secular news media. We document history as it unfolds!

Our Task:  Our task is to build a visual bridge with a biblical perspective on ancient and modern Israel. We educate a worldwide audience through our inspirational television programs in English, German and Norwegian. We have produced 85 half hour documentary programs created in our T.V. studios and broadcast weekly from Israel via satellite to every continent.

You can now give online!
Click the 'Donate' button and it will take you to our secure online giving area
Email the office with your designations
(Credit Card and Refund Policy)

Click on one of the links below for more information